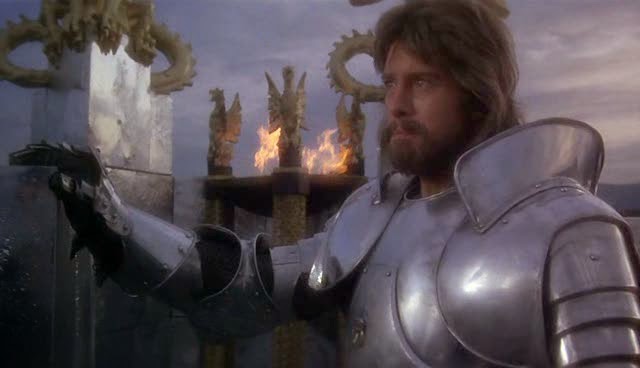 Nigel Terry, the charismatic actor who portrayed King Arthur in what is probably the most defining movie of the Arthurian tale - Excalibur - has died.

Excalibur has been a gateway film for many generations of viewers to experience the Arthurian story.  Of all the many movies and television shows that have been made about the Knights of the Round Table, none of them was more faithful to the original material than Excalibur.  And of all the esteemed actors who have portrayed Arthur himself, in all those many versions, Nigel Terry may not have been the most famous, but he was easily the most memorable.

Whereas Sean Connery showed us an aging Arthur over the course of a few months of his rule, or Clive Owen gave us a week out of Arthur's reign, Excalibur took us from the events that led to Arthur's birth, all the way up until his death, and Nigel Terry gave us that entire performance, starting as the teenage squire to his brother Kay, and spanning the long rule of Camelot, until his final duel with Mordred, and the relinquishing of his sword to the Lady of the Lake.

In this, Nigel gave us the most complete portrayal of Arthur ever to appear on screen, and he did it with passion, and fire, and range, and humility.  His mark on the Arthurian legacy is enduring, and is not likely to be eclipsed for a long time to come.

Thank you, Nigel Terry.
Posted by Sean Rourke at 11:22 PM No comments: